I enjoyed listening to Dr. Alveda King, niece of Dr. Martin Luther King, Jr. She made many good points about abortion:

1. Organizations that come to urban areas to provide "therapeutic abortions" are doing nothing to help the African American community. Minorities have a higher percentage of total abortions performed. How can destroying part of the minority population help them?

2. Abortion does not lift up women. Abortion kills females babies, as well as hurts the mothers physically, emotionally, and spiritually.

3. A law can't make a woman want her baby, but it can keep her from killing the baby.

My own comments are these: 3,000 abortions a day do not help women. How can an easy-out such as abortion do anything but cause women to be viewed more as objects by men, instead of respected for what is uniquely female, which is the ability to bear children? It seems as though modern women's rights are often more about making women the same as men, instead of women being respected as women. I know the argument that many women died as a result of back-alley abortions before Roe vs. Wade. However, I think that what our country has chosen-legal abortions, which are not safe, legal, and rare, is a reckless, damaging choice. Abortions are most commonly used as birth control. As to the number of children per couple, we are barely at the replacement rate in the U.S. We complain that we don't have enough young people to pay into Social Security, and that our population has more old people than young. One answer to that is that 1/3 of my generation never saw the light of day, due to abortion. Sweden just legalized abortion for "gender selection" purposes. What is going to stop us from going down the same path?

Lord, have mercy on us, and help us embrace Your gift of life. 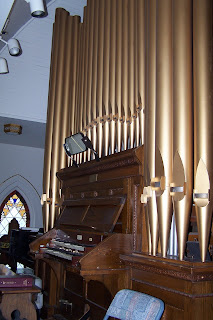 Yesterday, I began organ lessons! I am very excited to be learning how to play, and I hope to work up to a position as a church organist. I am taking lessons from the assistant kantor at the seminary, who is also the director of the children's homeschool choir. My first lesson was in the seminary chapel, so I got to play on the huge chapel organ. It was amazing, and I can't wait to learn more about playing the organ! The above picture is of the organ at Zion Lutheran Church, which I get to practice on. Thank you, Grandma Palmer, for paying for my organ lessons!

The Hammer of God 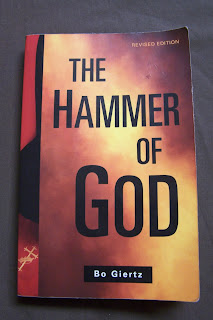 I had the treat of reading The Hammer of God, by Bo Giertz, while we traveled to and from Kansas City. It is historical fiction, which is my favorite genre; I give it a hearty thumbs up! The author, a prolific writer, was a former atheist who became a pastor and bishop in Sweden in the 20th century, although his influence on Lutherans worldwide continues today. It is divided into three distinct, yet complimentary stories: "The Hammer of God", "Jesus Only", and "On This Rock". They all take place in Sweden, from early 19th century to mid 20th century. In a nutshell, the book tells the story of 3 new pastors working hard at their vocations, confronting sin and complacency in their congregations and ultimately in themselves. Yet, it is not another hero story talking about the valiant efforts of these pastors to whip their congregations into a model of Christian piety. This is a book that confronts us all with our inability to please God with our own efforts. What does that mean for a pastor, who brings the Word of God and Sacraments to his congregation, who is far from the ideal that he preaches? Is he doomed to become a hypocrite? Does he need to try harder to be counted among the obedient? Or will he be left in utter despair? The author knits together a masterful story about the hardness of our sinful hearts, and the “Hammer of God”, His Law which breaks all pretense of having a special standing before God based on our accomplishments. Then, we are truly ready to receive the Gospel, which is the good news that Christ has lived the righteous life for us, taken our sins upon Himself, and paid for them with His blood. I don’t want to be a spoiler, but here is an excerpt from the book, when one pastor is talking to another:

Do you believe that Christ died only for the sins you committed before you became spiritually concerned? He would hardly have needed to die for them-you could put them away by your own strength. That you begin your day with the Bible instead of with Moliere, ….-that is only picking burrs from your coat, something you can get rid of yourself. But the corruption of sin is something that you cannot put away yourself. For this you need a Redeemer, one who suffers in your place; for otherwise you might as well give up every thought of heaven right now. Pg. 100

We have thundered like the storm, we have bombarded with the heaviest mortars of God’s law in an attempt to break down the walls of sin. And that was surely right. I still load my gun with the best powder when I aim at unrepentance. But we had almost forgotten to let the sunshine of the gospel shine through the clouds. Our method has been to destroy all carnal security by our volleys, but we have left it to the souls to build something new with their own resolutions and their own honest attempts at amending their lives. In that way, Henrik, it is never finished. We have not become finished ourselves. Now I have instead begun to preach about that which is finished, about that which was built on Calvary and which is a safe fortress to come to when the thunder rolls over our sinful heads. And now I always apportion the Word of God in three directions, not only to the self-satisfied and the believers as I did formerly, but also to the awakened, the anxious, the heavy-laden, and to the poor in spirit. And I find strength each day for my own poor heart at the fount of redemption. Pg. 103
Posted by Dana at 8:05 PM No comments: 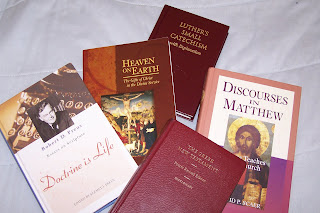 After Christmas break, we just finished our 2nd week of homeschool, and Stan finished his first week back. The kids and I will be going a little bit longer this year with full-time school, since we have gone out of town so many times. I doubt we will miss out on time at the pool, however, because the pools open a couple weeks later here.
Stan is enjoying his classes: Liturgics, Church History, Dogmatics, Gospels 1, and Greek Readings. Soon he will be working on a paper comparing two different Lutheran scholars' views on Biblical innerancy. I have the benefit of hearing his thoughts about what he is learning. Now we have come full circle-when we married we were both in school, and now he is back in school and I teach it. We are really all about school in this family, I think :).
It is always good to get back into the school routine again after a break, although this is the "plodding" time of year. The newness of the the school year has worn off, and the hustle and bustle of the holidays is past. It has been cold for a while, and we are look forward to warmer weather (which won't come for a while, here!). However, we are actually hoping we get another big snow, because a couple at church has the best hill for sledding. We had a blast sledding there about a week ago. They even have a pulley to bring you up the hill (although it wasn't working the day we went). So, all in all, we are pressing on. Elise is almost half way done with Algebra 2, and then for math I only have Geometry left to teach her. So, the days of pressing on become years, and here we are with a high schooler. She and Stan will probably graduate the same year. Class of 2013!
Posted by Dana at 1:53 PM 1 comment:

Lessons learned from the fall of Rome

Good thoughts as we embark on a new year, when we might be wondering what our country will look like in the future.
Posted by Dana at 2:25 PM No comments: 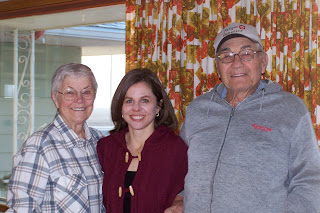 Happy New Year! I hope you all had a wonderful holiday season. We had a great trip to Kansas City and McDonald, Kansas, to see my grandparents. We arrived in Kansas City just in time for the snowstorm, which made driving to church interesting.

At our annual Christmas Eve waffle party, we had 21 people. My mother-in-law jokingly said to my father-in-law, "Just look what we've done!" Quite a clan, once the kids, spouses, and grandchildren are all together! At my grandparents we were able to see aunts, uncles, cousins, and their children. We also had lots of time for dominoes, and our favorite card game, Pitch.

After spending time with extended family, and filling out the 2010 calendar with my family's ages for their next birthdays, I began thinking. The days fly by now, but someday, Lord willing, I will be looking back across my lifetime. One thing I know I will never regret is the time I have had with my children.

Behold, children are a heritage from the LORD,...
Like arrows in the hand of a warrior are the children of one's youth.
Blessed is the man who fills his quiver with them. Psalm 127:3a, 4

We certainly are blessed, and we look forward to seeing our heritage grow up and expand. To God be all praise and glory!
Posted by Dana at 2:09 PM No comments: 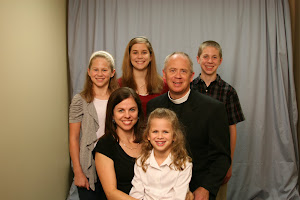 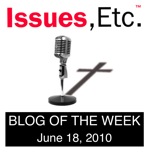